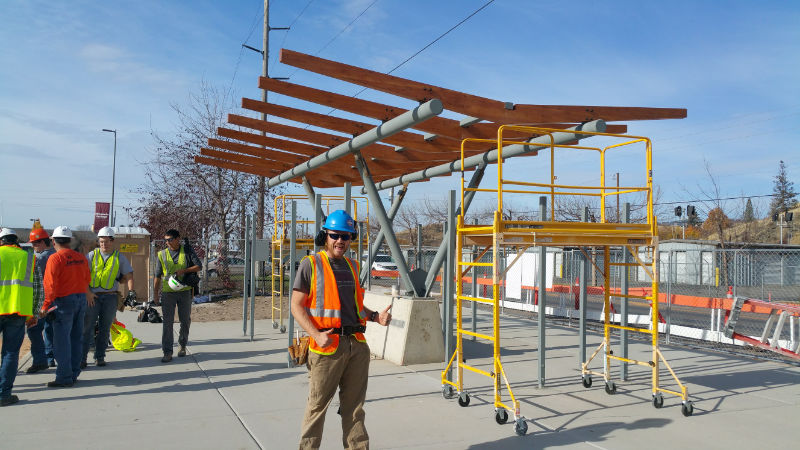 Last year, Western Montana Lighting and the Silver Foundation were proud to announce the creation of a new scholarship to support two students per year in the Sustainable Construction Technology program at Missoula College. The scholarship is renewable each year, as long as the student maintains a required GPA. Student Tommy Jensen was the first recipient of the Silver Light Scholarship, and we’re excited to follow up this holiday season and share a bit about his experience.

Tommy hails from Idaho and originally pursued a political science degree at Boise State University when he was in his 20s. Life’s winding road led him away from Boise and he landed in Missoula, where he worked in the hospitality industry until 2017. Another plot twist caused Tommy to reevaluate his career path and he set his sights on the Sustainable Construction Technology program, which he began in 2017.

In addition to carrying a full course load, Tommy is acts as a Student at Large, which is an official student representative. He is involved in a number of committees relevant to his program, including the sustainability committee, the recycling committee, the KRELF Fund committee, and the transportation committee. (The photo that accompanies this story shows Tommy enthusiastically at work on a new bus shelter near Missoula College as part of his committee work. The project was supported locally by Jackson Construction.)

As a Sustainable Construction Technology student, it seems clear to Tommy that he and his fellow students could both put their skills to practical use and serve their college community at the same time. He works closely with program director John Freer to raise the profile of the program and the work that students do not just to complete their AA degree, but also to benefit the greater Missoula community. For instance, during their two years in the Sustainable Construction Technology program, students build a house that is eventually donated to a local housing authority to sell to a low-income family at cost.

The Silver Light Scholarship has given Tommy a sense of urgency to make the most of his time at Missoula College, as well as a feeling of connection to the broader Missoula construction and business communities. This past September, Western Montana Lighting owner Drew Mihelish toured Missoula College’s south campus and met with Tommy, amongst other students. He says that he is grateful to be developing relationships with industry leaders like Drew, which will help deepen his expertise beyond the college program.

When he graduates, Tommy will hold an Associate of Applied Science degree, along with a wealth of practical construction certifications. Whatever comes next in his career, Tommy says, the Sustainable Construction Technology Program and a boost from the Silver Light Scholarship have pointed him in the right direction for life.

If you or someone you know is interested in pursuing an Associate’s Degree in Sustainable Construction Technology, we encourage you to learn more and apply for the Silver Light Scholarship!